It was a Great Gatsby evening at the J.E. Broyhill Civic Center as The Caldwell Chamber of Commerce celebrated 100 years of business and announced the L.A. Dysart Award winners. The room was filled with Chamber and
community members in their flapper dresses and glad rags!

The L.A. Dysart Award; an award that recognizes individuals who exhibit extraordinary citizenship within their community through their service endeavors was presented to George Crowell Jr. and Carol Deal; the award was
presented to the recipients by former winners Ron Beane and Dr. Caryl Burns. The award was named after Louis A. Dysart, a man who was a humanitarian and leader in Caldwell County. Louis A.Dysart was born to William
Washington Dysart, father, and Ms. Laura Cooper Whittier, mother in the early 1900’s. L.A. Dysart started his career as a cashier at Union National Bank and eventually became President of the National Bank of Lenoir. Through his outstanding community service, he set a precedent that we should follow as Caldwell County Citizens, just as George Crowell Jr., Carol Deal, and past award recipients have.

George Crowell Jr., 2020 L.A. Dysart Man of the year recipient is known for being a humanitarian and philanthropist. He has served on many boards in Caldwell County, including: CCC&TI Foundation, Bank of Granite, Lenoir Advisory Board, First Union National Bank Local Board, Mutual Savings and Loan, and more. Mr. Crowell graduated from Lenoir High School and attended UNC Chapel Hill. After he returned, he owned and operated Crowell’s tire and appliance store, alongside his father. Crowell’s store was an amazing business in downtown Lenoir, across from the courthouse for many years. The Crowell’s did more than sell tires and appliances, they sold hand tools, bicycles, and was a place many people in Lenoir could start their credit. It was passed down from George Crowell Sr. to George Jr.,who met no stranger in the store, until finally passed down to George III, where it then moved to two different Caldwell County locations, before closing after many successful years in business. George Crowell Jr. is a member of First United Methodist Church, where he has served as a Sunday School Teacher, Chair of the Usher Committee, and member of The Board of Trustees. He has also been a member and tutor to
students in the Caldwell County School System. George is married to his high school sweetheart, Helen Withers and they have two children Vale Crowell Biddix and George Crowell III.

Carol Deal, 2020 L.A. Dysart Woman of the year recipient is best known for her community activism in Oak Hill. Carol earned a Bachelor of Science Degree in Biology from Greensboro College and eventually went on to get her RN Degree from Caldwell Community College and Technical Institute. After her studies, she began her career in nursing and after 8 years of working for Dr. George Hancock, she decided to begin a new journey in home health care. The majority of her home health care patients were residents of Caldwell County. After 17 years in home health and 25 years nursing, Carol retired and concentrated on service for the needs of her community. She is an active member in the Ruritan Club, an advocate for Oak Hill Park (the first community park in Caldwell County), a tutor, proctor, and server at Oak Hill School. She also continues to serve as a volunteer and charter member on the Board of Directors for Pet Partners Network. Pet Partners Network is an organization Carol, along with other leaders in the county started to provide animal rescue, foster, and adoption services. Carol operates the Oak Hill Food Pantry and assists with the Caldwell County Farmers Market, which she and Arvil Greene revived in the early 1980’s. She is active at Cedar Valley United Methodist Church and a member of Waterlife Church. She leads bible study groups, coordinates meetings and community outreach opportunities for the church. Carol has been married to Buck Deal for 50 years, they have two children and 4 grandchildren.

A special Visionary Award was presented to Kathy Carroll by Ann Smith. Kathy has been involved in and is passionate about expanding, rebuilding and growing Caldwell County. She has worked on many projects and
programs within the community, that include: Caldwell County Schools, Robin’s Nest, Burgess Chapel, and The Town of Hudson.

An Ambassador of the year award was given to Kenzie Edmisten Triplett, presented by past recipient Amber Myles. Kenzie is a Co-host on the Morning Moo Krew Morning Show for Foothills Radio Group. Kenzie has committed
countless volunteer hours by attending Chamber events, going on member retention visits, and attending Ambassador meetings and ambushes all throughout the year of 2019. Kenzie genuinely exemplifies positivity and
ambition for the Caldwell Chamber of Commerce.

The Centennial Annual Dinner ‘hit on all sixes’ as we honored these outstanding citizens by the presentation of the L.A. Dysarts Awards for the 60th year, along with other awards and celebrated 100 years of The Caldwell Chamber of Commerce serving Business, Community, Education, and Tourism.

This beautiful Roaring 20’s evening in Caldwell County proves, truly, “Together we are stronger!” 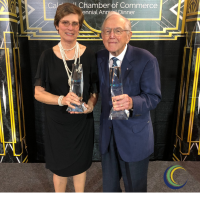